preview of upcoming work, my personal highlight for 2017 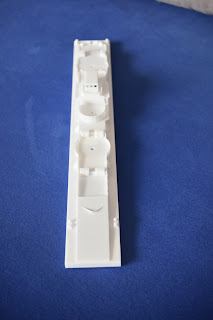 as my birthday is coming closer, I will show you the first pictures of my absolute highlight for this year.
It is the 1/144 copy of a German Artilleriefährprahm.
While planning the operation "sealion" the Germans started designing a lot of new ships. Especially for the landing they invented several landing and support ships. As the Pionierlandungsboote and the Siebel Fähre were too small, the Kriegsmarine designed the Prahme. It would take several weeks to write about them. Instead of that, if you like to learn more about German landing crafts, please check this wonderful page:  http://www.historisches-marinearchiv.de/index.php
Over the last years I got the Siebel ferry as a simple landing craft, as a Siebel schwere Flakfähre (AA craft), the Pioneerlandungsboot 39 and Pionierlandungsboot 41. About the MAL I do not want to talk, I just realised that it is not 100% correct so I will redesign it in the next months.
So what was missing was the biggest type, the Prahms, which …
Kommentar posten
Mehr anzeigen
Weitere Posts