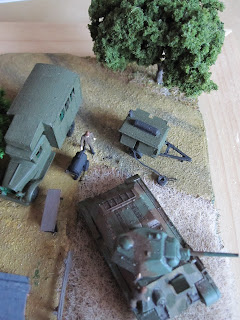 So here are the final pictures: 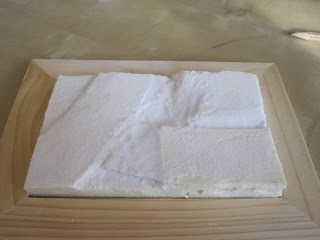 With a picture frame from Ikea, I build here a small diorama with my second 3D designed model. It's a ZIS 5 with a maintenance body. The cabin, frame and the wheels are from Panzer Depot.


At the beginning I had only a raw idea, I wanted to show the repair crew with a Russian tank. Best fit, of course a T34.

The ZIS 5 from Panzer Depot together with the cabin from me. I had to add only some material above the driver's cabin, here the print had a mistake, or better my drawing.


The first layout, at this time I was still changing the arrangement.

Okay a small house in the corner could be nice.
The house will be cut of plastic sheets. The roof will be paper. On the walls outside I plastered a kind of creme to give it a more realistic appearance.


Second variance. The tank would be now on the middle of the diorama and the truck would be placed on the road.

A side view, the house now with its paper roof, but still not final.


The ZIS 5 is nearly done, painting and some details are missing but …
Kommentar posten
Mehr anzeigen
Weitere Posts