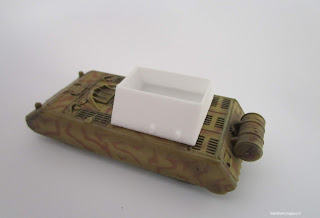 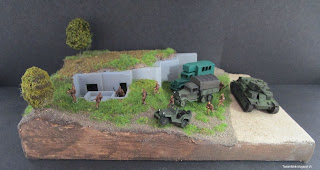 This week I finished a new old diorama. Actually the Russian bunker is several years old, I got it printed together with other stuff, I never used. So while cleaning up a bit, I found it again and decided to use it inside a small diorama.
The diorama is built on a picture frame from the one Dollar store, size is 10 x 15 cm.
The countryside is done with plaster and some foam, which I cut into the correct form, glued and then covered with plaster. After painting I used a home made mixture of different grass, small stones and dust from the street to create the road and the area around the bunker.

The Bunker is a Russian design from WWII, which I found inside a Russian book about the so called Molotov line. The bunker was designed to carry two heavy MGs.
At the moment you can see, that I have no doors, maybe I will add them later.
First i built a scenario, where the red army uses the bunker. Therefore I parked some Russian trucks and one tank, (from Panzer Depot) put my Russian Army from Pega…
Kommentar posten
Mehr anzeigen 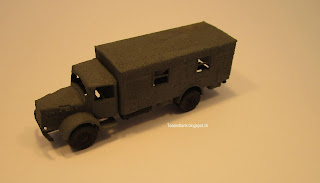 
English version Mercedes repair shop with power unit
After some weeks of inactivity, I proudly show you a new set. For the field repair shops the Wehrmachts used the repiar body with mainly two different trucks. Either the Mercedes 4500S or the Büssing 4500. As the Büssing cabin is still under construction, I offer the Mercedes with the repair body and a small power unit. The power unit was used to produce the power to be able to weld outside in the field.
Kommentar posten
Mehr anzeigen
Weitere Posts