New on my work bench 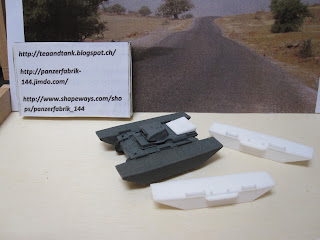 This week I received a new delivery from Shapeways. So I give you a short overview about my next projects on which I will work the next days.

Schwimmpanzer II ready for Operation SealionSo far I am done with the tank. The pontons are ready and what you see is the second print. Further I added a piece to close the motor cooling plates like it was on the Original. In the next days I will start drawing the Schwimmpanzer versions of the Panzer 38 and a second version of the Schwimmpanzer II.


Some new stuff for an industrial dioramaFor this diorama I`m planning now for months. From the first idea I have reduced everything to a much smaller version. The topic is still a secret but of course it has to do with tanks. On the first planning I thought about a really big diorama, at the moment I will go with a small one, which will fit into a shoe box.

German Radio trailer 3 axis This trailer is print no. 3, I believe. The first version was too small, version two was a bad print and now I have a ver…
Kommentar posten
Mehr anzeigen
Weitere Posts