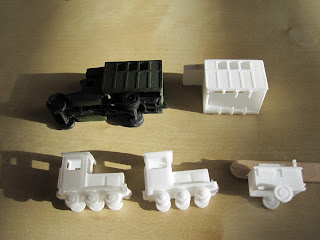 Finally I have finished my secret German Bunker.
With some ideas in mind about French bunkers from the Maginot Line I created this diorama.
I wanted to show the arrival of a narrow guage train and the entrance of a Bunker complex.
The Germans used a lot of the French Maginot Bunkers as production plants. So for example where I grow up, there the Germans used the French Bunker to produce parts for German submarines.
So I decided to go with one Bunker and the entrance to a second one.


My collection of trains

For the foundation I use again my Japanese Zen garden, so here you can see the layout
To fix the rails in the right distance and to make the gluing easier, I made these distance holders. So the rails have always the same distance and fixing is very easy.
One of the  trains and the first cut-off of the entrance. At this time I had not decided how the mountain next to the door should look.

The first Bunker, made out of foam, he will be placed in one corner. The openings for the guns are still …
Kommentar posten
Mehr anzeigen
Weitere Posts