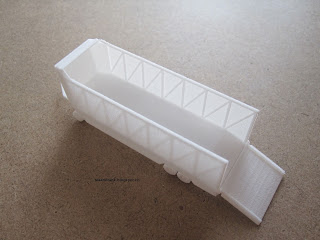 The Landwasserschlepper is well known. Less known is the fact, that the Germans had a trailer for it.
Built by Kässbohrer it was big enough the take up a Famo.
The trailer was swim-able and could float behind the LWS.
As there was not that much information I had to start from a different side. I knew that it was big enough to take up a Famo. So with the dimensions from a Famo in 1/144 and the printing restrictions it took me two days and the trailer was done.
My model shows the bigger version, there were two versions of trailers for the LWS, but as my one could pick up a Famo I went with this design.
Honestly I have to paint some spots again, but the design works.
Here some pictures from the trailer and the LWS: