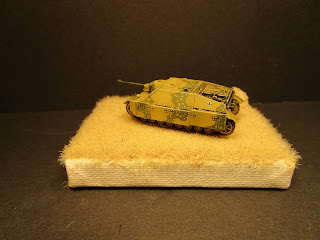 Instead of always doing dioramas with a summer theme, I decided to try the yellow grass, which I had bought many years ago. So taking one of my small painting canvas and in less than 1 day it was done. For the second version I thought I should do something with the tank chains. Putting them in the ground has the disadvantage, that they are then blocked with plaster or whatever you use for the ground. So I got the idea to do a form in 3D so that I could press as much thank chains as I want. Okay the prototype was a bit to big, so I had to cut of the corners. But the result was excellent.
Instead of  plaster I used a soft material, which is called "Das modelling clay"