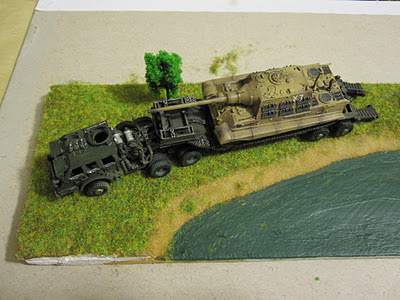 Since one week I have them both now. The American M25 with his trailer and the German Famo with Sonderanhänger Sd. Ah. 116. The price for both are high in comparison the the normal dragon tanks but once you have them in your hands, you will see, they are both worth it. Esspecially the M25 is a really beautiful set with a lot of details and a perfect box for storage. So here some pictures I took to give you an idea about the different execution for the job both armies had to do.

Of course I needed for the M25 a German tank, on the modell the Jagdtiger was no problem, in reality I'm not that sure, a standard Jagdtiger had a weight of 71 tons

My German Famo with his trailler transports a Russian T34, that should be no problem for them.