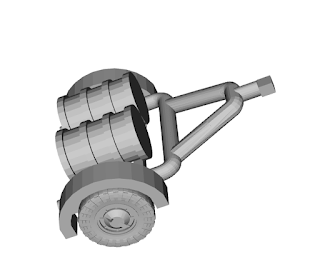 I had designed this small trailer some years ago, I was never happy what came out of the printers. While discussing with a friend I remembered this oil drum trailer.
After less than 1 hour I had a new and much better design. Now I like my small trailer.
The Wehrmacht used these trailers with one or with two oil drums to extend the range of their tanks.


If you want to purchase a set of two trailers, you can use this link. 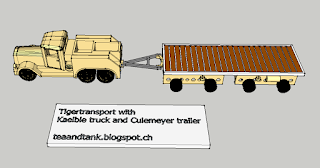 Here I present the complete Set!
To transport the heavy German Tigers, the Wehrmacht used Kaelble trucks with Culemeyer trialers.
The Kaelble was developed and built mainly for the Reichsbahn, but later the Luftwaffe and Wehrmacht took over some of them.


Meanwhile I got the Kaelble printed and partly painted. Okay they were finished - I thought and then I took some pictures yesterday and saw on the pictures still some spots with missing or wron paint. So I have to rework everything again. But anyway, from my wife I learned, that I could make a movie with the pcitures I took.

The Kaelble is now for sale at Shapeways, the trailer in the 2 axis version as well
Kaelble Z6V2A
set of two 2-axis trailer
complete set