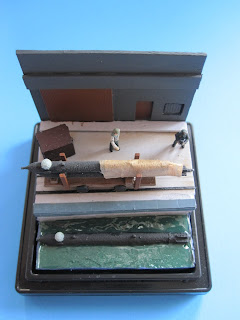 Today I present a small diorama with my two German submarines. These type of submarine was called Neger, they were one of the German "Secret Weapons" with which the war should have won.
For technical clearance, the Neger was not really a submarine, as they could not dive. They simply swam close on the water surface. Besides this technical fact, they were very dangerous for the soldiers, a lot of them never returned.
One of the first mission happened at the Anzio beaches in Italy where they should destroy the American / British landing fleet.

The submarines are 3D printed and painted in black. Most pictures show this color for them.
The rest of the Diorama is really handmade.

T-34 with Mine cleaner 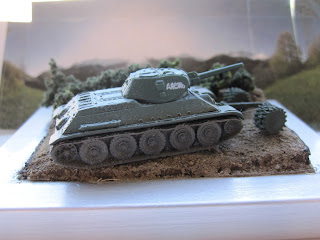 Today I introduce my latest version of the Russian T 34.
The Russian produced some T-34 with mine cleaners. There they had two different versions.
As I do not found a sketch I had to take the dimensions from the some pictures I found on the web.
So here is my T 34 with mine cleaner.
The mine cleaner is a 3D product.

And here some pictures from original T-34 which I found on the internet.