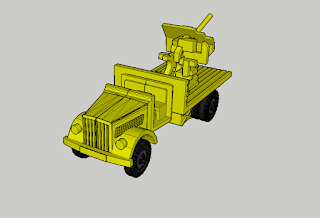 The idea for this combination came to me by accident. I was looking for something totally different, but I like this Opel Blitz version. And after building the Opel Blitz with the wood generator and as a fire engine, this was not more than the quick combination of stuff I already had designed.


I found some nice variants of this model with an armored cabin. They say, that such a Opel was used by the German Wehrmacht in France in 1944 / 1945. As I do not found any picture, I decided to keep hands of from this mystery. My Opel Blitz was used during the African campaign by the Anti Aircraft Abteilung JG.27 in Libya somewhen in 1942 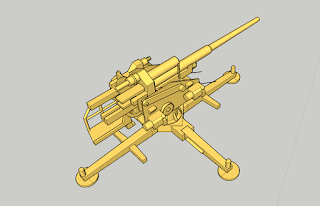 A friend of mine asked me for a special model, the heavy Flak 12,8 cm Flak 40.
This was a very deadly weapon, which was used in the role as an anti aircraft cannon. Most known is the twin version, which was installed on all Flak Towers, in Berlin, in Hamburg and in Wien (Vienna).
But he wanted the single version, so I started the search. On the internet I do not found that much information, most is written about the 12,8 cm twin Flak and it is hard to find some pictures of the standard version.
The standard 12,8 Flak came with two different versions. At the beginning it was equipped with the cross frame, as used with the 8,8 Flak. Later the Germany tried to mobilize the Flak and changed to a different frame. At the moment I will do only the cross frame, maybe later I will add the second version.

So here my first preshots, I still have to scale it and modify some details. 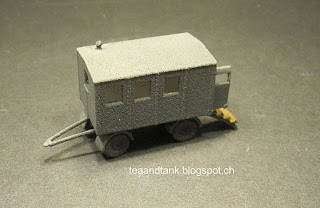 While surfing the internet I found an interesting picture of a German unit somewhere on the Eastern Front. They had taken a 3-ton trailer and constructed on the platform a bigger field kitchen. I knew from the flied kitchen transported and used on the Einheits-Diesel, but a complete kitchen trailer was new for me. Taking the 3-ton trailer as a basis, I designed with these pictures on the hand a German field kitchen trailer. After half a day it was ready to be used with any German unit on all theatres.