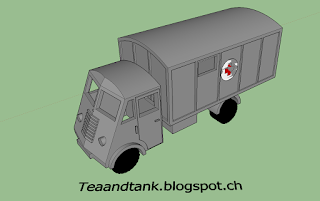 Today I just finalized the work on two French trucks which were widely used by the German Wehrmacht. Renault developed these trucks for the French army. But while the French lost the war and Germany occupied most of France, the Germans pressed Renault to continue production of trucks for the Wehrmacht. These trucks saw action on all theaters, only from Africa I saw no pictures. I designed two versions, a regular truck and the ambulance version. I might add later two special versions, the Renault with „Holzvergaser“ and a fire engine. For the last one I need some more information.
Today I present a preview, these trucks will be ready to order by end of may.

Inside The Tanks: The Sturmtiger - World of Tanks

April 25, 2016
Last week I found while searching for something different these videos:
Inside the tanks......, they are on youtube and show the internal of several tanks.
So maybe you would like to get an impression of how it looks inside.