It is done. I finalised y work on the German Mercedes Benz L1500. In general an easy one, until I realised that the roof was a real challenge. There the surface comes with a radius, goes over into a curve and ends on the window and on the door. As I hate curves and have to live with a poor imagination, it took a while.
Now I have the Fire brigade or as it is called in German LF 8 Löschfahrzeug. The interesting point is, that you can paint it in all colours. In green for the Feuerschutzstaffeln, in dark yellow for the airfields of the Luftwaffe or in grey for the Wehrmacht. Even white is possible as the German Red Cross used some after the war.
Besides the fire engine version I created the radio version.
And a premiere for me, I get it printed in two parts, so that you can paint the interior (meaning i added the seats, and even you could place a complete crew inside.
As soon as I get the first prototypes back from Shapeways, I will update the blog and will show you some pictures. 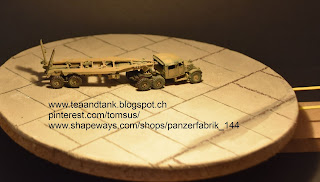 Panzer Depot offers since last year the Scammell Tank transporter. So maybe the Scammell wrecker will come from Panzer Depot as well. Meanwhile I ordered two of them. A similar model you can buy from Graham Models and from http://arrowheadminiatures.co.uk/


and here to compare the old model from Graham Models: