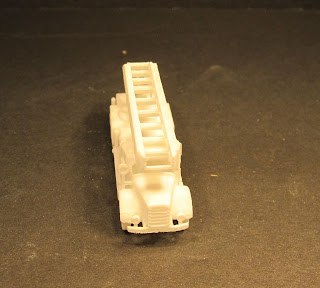 Here are the first Pictures of my brand new Mercedes DL 22 for the German Feuerschutzpolizei.
The Drehleiter 22 (DL22,  DL = Drehleiter with 22 meter length) was the most used Drehleiter at war times. There was a smaller version, the DL 17 on the Opel Blitz.
The Dreheiter DL 22 was built on the Mercedes 4500 chassis.

As it was used during the complete WW II, so you can paint it in nearly all colours:
at the beginning they were painted in Feuerwehr Rot (red)then the fire brigades were attached to the German Police, so Tannengrün (dark green) was used (Feuerschutzpolizei)then the Wehrmacht grey was introducedlater to the end of the war


Here is a list of all my fire brigades / engines you can buy from my Shapeways store:
Mercedes DL 22 in 1/144
Renault AHN fire engine
Opel Blitz LF8 Renault AHN double pack
Mercedes LF8
Trailer with pump