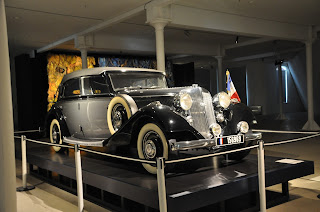 Last weekend I had a chance to visit the new German Army Museum in Dresden.
Who knows Munster and comes to Dresden to see tanks will be very disappointed.
Dresden is a Museum to explain and show different aspects of war or aggressive conflicts. No wonder that you can see there things from more than 500 years history. From early knights, their weapons, the evolution of riffles and much more to cold war exponents, they show a lot.
The most interesting part for me was of course the WW II department. As I said, not that much tanks, only some vehicles but therefore you could see what war means in relation to movies, to civil people and a lot more aspects I never thought about. At the end I found some tanks outside, most of them after WWII. On the other side they showed for example which animals humans had used or still use to support them for fighting.
Here is are some highlights which I liked the most.


A Horch from Paris, later used by General De Gaulle