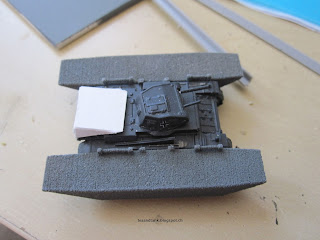 Based on the Panzer II there were some trials for the Operation Seelöwe (sealion, the landing in GB during WW II) to bring tanks into water.
Besides the Panzer 38, the Germany made several tests with a Panzer II.
They added on the side flowing tanks which made the tank a duck. The tank could swim in calm waters.
For a landing on the British beaches the Germans would need very good weather conditions, no British fighters, no waves - or simply no enemy at all.
So here the first types the Germans tested:

The side tanks were done in 3D printing and can easily addded to the gap between the tracks and the hull.


And here the final model with the additional box on the backside.


A second design was to fix the tank with a complete tank. That solution was a bit harder to handle as the tank had to drive below the tank and than it was lowered and fixed the the tanks hull.
And here the final design, I forgot to add the sidebars which were used to lift the tank.