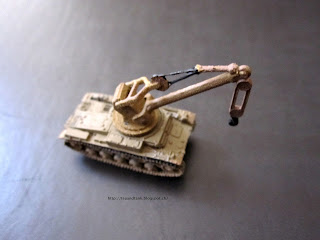 I found this interesting variant on the page www.panzerschreck.de . According to what I read there, this version was built only one time and the Red Army found it when they reached a tank factory. So not that much information but an easy and quick rebuild.
I took a Panzer II lower body and added one of the cranes I had designed in the past for my Bilstein crane. After painting, the model was done. I decided to go with yellow instead of grey because the Russian found the tank at the end of the war and at this time all tanks had in general yellow paint.
Here some pictures: