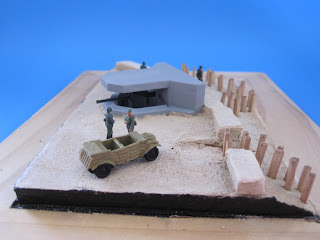 At the Atlantic coast you can find a lot of German Bunkers. Normally they belong to one of the Regelbauten, a list of standazid types of Bunkers. Not so in Bernières-sur-Mer. Here we find a special combination of two  Regelbauten. This Bunker was armed with a 5 cm Kwk gun. The Bunker is located on the beach, directly on the boulevard of Bernières-sur-Mer. This section of the beach was attacked by the Canadian and British troops.
On D-Day 1944 the 3rd Canadian Infantry Division landed at this spot. After some hours of fighting they liberated Bernieres-sur-Mer.

My diorama shows the Bunker with the 5 kwk gun, some days before the Invasion. The obstacles are wrong, mostly you could find them in the Nederlands, but I added them as otherwise I had the feeling, the diorama would look so empty. The Kuebelwagen is from Wargames South (link) and the 5 kwk gun comes from CDG (link), a famous producer of 3D printed tanks and accessorizes.