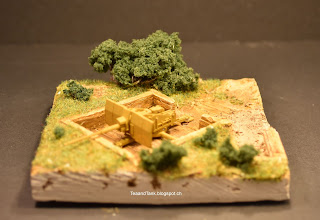 At the moment I try to finish several stuff parallel. So between paining the tanks, trailers and others, I design new stuff. I would like to place my next order as an Eastern gift for me. But at the moment the latest design still has too much errors and holes. So as Shapeways said, your design needs a bit more love.
So while I keep you waiting I will show you some of my ongoing projects.

At the moment I build a small diorama in 1/144 for my brand new Flak. Here the work is mostly done, but I would like to add a second scenery to this diorama.
I will take the same base but would like to show a winter scenery. The Flak will be the same, the 5 cm Flak will be published soon I only need to correct some small mistakes.


My second project at the moment is a ship again. But this type of ship is even less known as the Marinefährprahm or the Artilleriefährprahm. It is called Infanterietransporter. Developed from the Siebel group, the same team of constructors who had the idea for the Siebel Ferries…
Kommentar posten
Mehr anzeigen
Weitere Posts