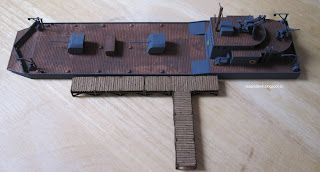 English version During WWII the Finish Army fought together with Germany against Russia. To support the Finish Navy, the Germans delivered several MALs (Marine Artillery Leichter) to Finland.
Some years ago, I had designed this model and got it 3D printed. Quickly I had to realize, that the dimensions were not 100% correct. With the publishing of the Finish WWII picture archive I got the wonderful opportunity to find a lot of pictures of these MALs in Finish service. Best of all, the Finish photographer took pictures during the time, the Germans completed the ships in Finland and during the training of the crews. With all these details it was much easier to redesign the ship again. If you want, on my old never completed Homepage, I show some pictures of the old version.
The design was done, printing no problem and next was the painting. Actually you need mostly two colors, wood for the platform and a dark grey for the ship. After painting all details and the adding them to the ship, it …
Kommentar posten
Mehr anzeigen 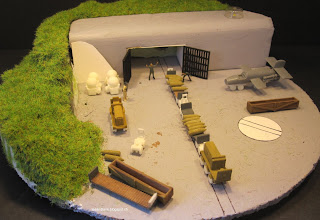 During WWII nearly every country had bunkers. Even the USA built several bunkers, for example around San Francisco you could still visit some of them. In Europe France had the Maginot line to protect their country against Germany. After the occupation of France the Germans used several bunker complexes to store or to produce inside parts. In several of them the Wehrmacht produced parts for their U-Boots. The bigger fortifications had inside narrow gauge trains to transport ammunition and the crew.
My new diorama shows the entrance of one of the French fortifications during the German occupation. All bigger fortifications of the Maginot line had fortification entrances where they brought the ammunition inside the complex. So this is my idea, an scenario at the entrance of such a overage. The German Wunderwaffe will most probably disappear before the final version.
About the built:
The basement is a round plate, mountain and the bunker itself is made out of foam. The entrance doors are 3D…
Kommentar posten
Mehr anzeigen
Weitere Posts