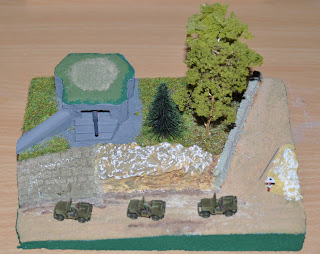 Here I will show you a picture of one of my dioramas I left in Switzerland.


While it is very well known that the Germans built Bunkers in France (Atlantic wall), in Denmark, the Nederland and in Germany itself, it is not so well known, that they built a lot of Bunkers in Italy.
Besides the Gustav line or the Hitler line, which were more field fortifications, the Germany had strong bunkers on different locations.
The diorama is complete made out of foam. The dimensions of the bunker are based on other bunkers I have and on some drawings I found on the Internet.
Kommentar posten
Mehr anzeigen 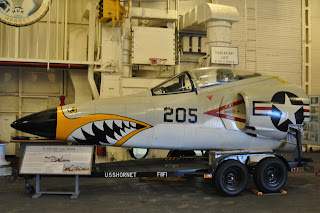 For all like me, who do not like to build a complete airplane I present here a nice idea. I found this last weekend when we visited the USS Hornet in Alameda CA.

On the middle deck they had two of these trailers to transport only parts of an aircraft. If this is the original idea behind I do not know but I liked it. For all who like ships I can only say, go and visit the Hornet, even the ship is no longer in the conditions of world war II, is is still very impressing to see a lot of the rooms, the flight deck and the tower. Here a link for google map: http://g.co/maps/uw25x