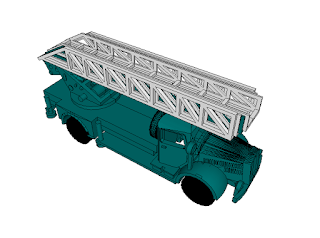 During World War II, the German fire brigades became part of the so called "Feuerschutzpolizei". The Germans created standardized vehicles and described what equipment and what functionality had been needed. For the rescue service they standardized two types of turntable ladders.
First the DL 17; a fire engine with some equipment and a ladder of 17 m length.
The second truck was a fire engine with a ladder of 22 m length.
I have some trucks from the "Feuerschutzpolizei" but a turntable ladder? I never saw one in the scale 1/144. Very soon I found out why; the design of the ladder was not so easy, the ladder had four parts and with the requirements from Shapeways for a successful print it took several attempts to find a design what is close to the original and the print requirements. So here is my German Drehleiter DL 22. The number 22 indicates the maximum length of the ladder, here 22 meters.

Here the first previews of my latest 1/144 design: