some new not really finished dioramas 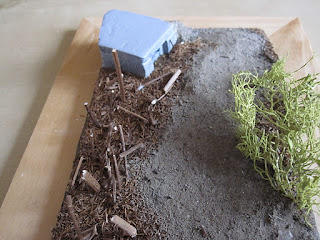 I hope I'm not the only one who starts with new diorama even there are a lot others still waiting for getting finished. So I started by end of last year with two new dioramas because I wanted to try out some new techniques. At the moment these dioramas are on my workbench but not in the first line. Here I tried some plant and pieces I found in the nature. The bunker should be a Japanese one and the diorama should present a scene somewhere in the pacific. The bunker is made out of foam and after glueing painted in grey. So now everything is waiting for the first American tank or truck but I have yet not decided what will be on the display.

This is a older diorama which I built and then made a foam to diecast it with Plaster of Paris. The small trees are from Woodland and the truck is on of the latest News from Panzer Depot.