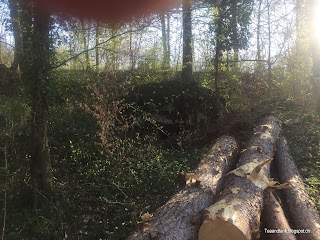 Small bunker in the forest foundOn one of our bike tours we came to the river Rhine area, were the borderline runs in the middle of the river. During WW II the Swiss Army had the danger, that the German Army could invade Switzerland. Only the river was a obstacle for the German Wehrmacht. Because of that, the Swiss built a lot of fortifications parallel to the borderline. Some bigger and more famous bunkers are at the Bodensee area.


And as I said, some Bunkers close to my home town, between trees and bushes, so that it is really hard to discover them: