As I like any type of recovery vehicles it was only a question of time until I would design the Queen Marry trailer. The Airfix recovery Set gave me the dimensions so that the construction was not so complicated. Only with the tractor I was not so happy. The Airfix tractor looks too small. Therefore I went with the Crossley Q tractor. This was the combination I found several times on the internet. 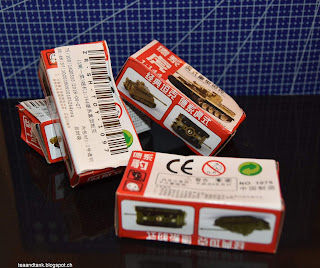 For several weeks they offer Panther versions for a small price at eBay.
I took the chance and bought some of them. Besides the fact, that they come with wheels (and a  ball) on the bottom, they look not so bad.
So I decided to transfer them into Bergepanzer Bergepanther.
The good point is, that the Bergepanther was used in several different versions. There was the main version with a spade and complete wooden box on top, with the winch inside. On the front plate was a heavy machine gun. The machine gun is visible only on some official pictures, on battlefields I never saw the machine gun.
The first version were field improvements, they simply took the turret off (we talk about damaged Panthers) and closed the opening with a wooden plate. These versions had no winch, no spade.
The next step was the real Bergepanther, which MAN built. They came with the winch and the spade. On top was an open wooden box. The crane was added on the side in three or 4 parts.
For th…
Kommentar posten
Mehr anzeigen
Weitere Posts