Puma-Meeting Somewhere in France in 1944 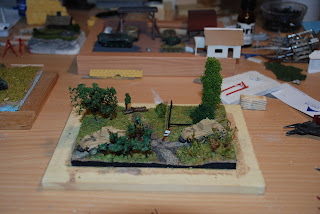 Once I received my own Pumas from the Panzer Depot, I knew that I needed to build a diorama. Nearly at the same time I got the first German tank crew from German company, Preiser. So my idea was to build a scene somewhere in France. The Pumas would meet with their commander to get new orders. As a foundation, I decided to go with a wooden picture frame from the big “I”. The ground is a piece of Styrodur or better kwon in the USA as blue foam. I shaped the terrain with several tools until I had the feeling it would work. The meeting point was a kind of an intersection of two small roads. I pained everything with brown color, before I clued the grass and the sand on it. For the road I went with some dirty powder I took from a road not far where I live. For the fence I took small toothpicks. All trees and the green is made with stuff I had at hand.