M 19 Diamond tank transporter in 1/144 but where is the trailer? 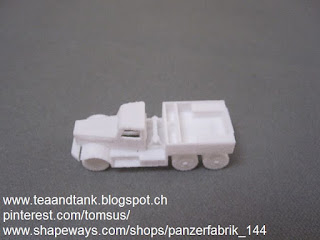 Some weeks ago I finished work on the Diamond truck, created the dump version and ?
Yes of course the most known combination was still missing. The trailer for the M19 tank transport set.
So where is it?
Today I can at least present the drawing. When I sent the tractor to the printer, I realized that the trailer had some mistakes; wrong dimensions and both problems made it impossible to get it printed.
After working on some other projects I finished this week the drawing and will send it in the next two weeks to Shapeways.
So in some weeks I should have the German tank transporter set, the one with the Sonderanhänger 115, the second version with the Sonderanhänger 116 and for Tigers and King Tigers, the version with the Culemeyer trailers.
On Allied side, I have from Metal Troops the Dragon M25 set, the British Scammel set and the British Diamond set.
The point is, that the order to build the Diamond tractor and the trailer, came from the British war ministry.  The british industry had no fr…
Kommentar posten
Mehr anzeigen
Weitere Posts