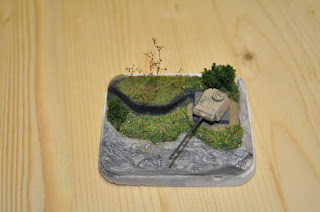 As I started to build my own Bergepanther I was thinking for what I could use the turret. The best idea I had was to build one of these small bunkers the Germans used in East Germany / Poland and in Italy. There these lightly modified Panther turrets or normal turrets. They were put on either a concrete bunker, an iron box or even on a wooden construction. Depending on the material which was used they gave room for the crew or just enough room for them to fight against the enemy. As I had enough concrete and time, my builders decided to build the concrete version. A piece of wood cut into the right dimensions works for the concrete basement. A door cut out of paper makes it complete.

The diorama itself is built up on a piece of gypsum which I casted into a mold I used several times before. With some graving tools I put the trench and the stones on the surface. The rest is only color and some green.