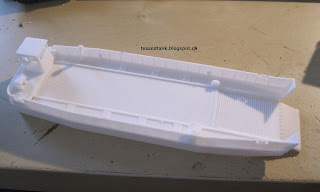 Today I can present one of my first Highlights for the young year 2016!
The German PLB 41, Pionierlandungsboot 41 of the German Wehrmacht.
The Germans used it on all theaters, Mediterranean Sea, East sea and North sea.

As the ship was build in two half, it could be transported with special flat rail wagons.
I saw pictures of versions with and without the small house.

I used the last days, to check what I have designed in the last year.
So here are some of my highlights:

German Schnellboot S-100
I like the model, it is a nice model but it was very hard to get it. I had to buy a lot of 1/1250 ships before they sent me my Schnellboot. A nice idea for 2016 would be to build the older version as I have plans and tons of pictures of it.


order your Rübezahl at Shapeways

Panzerjägerwagen 51 okay the design is still under construction and I haven`t opened the drawing for several months. But I have it on the list to get it finished this year. And as with the Schienenwolf, I collected some experience with rail amour, I plan to build the…
Kommentar posten
Mehr anzeigen
Weitere Posts