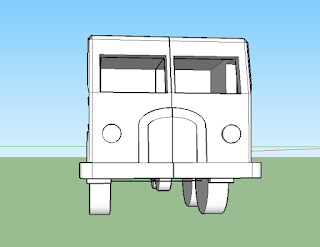 After some Kriegsmarine designs I am back with a very rare German truck. The Faun is really rare, in total only two units had been built. Both saw action during WWII, but mostly only in Germany where they had been used for transport jobs between factories. One truck survived the war and was used by an East German company until the late 70s. The idea for this truck came from one of my friends who collects stuff in the scale 1/120. The change from 1/144 to 1/120 is not such a big challenge. So here some first impressions from the truck. It will come together with my 3 axis trailer.

And some evenings later I am able to present the final version, for the first print I will do it of course in 1/144.