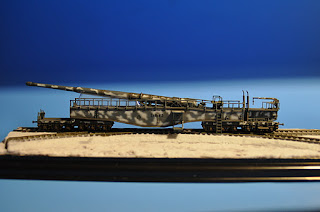 Very close to Christmas I got a model for an acceptable price I was looking for a long time.It’s the Leopold 28 cm gun, which the Germans used during World War II. This model shows a winter camo what was not with the normal production.
Krupp built 28 pieces of this railway gun. The most well known one was the one which shot at the Anzio beach during the American landing there. It took the Americans a long time to find out what and from where the shoots came. Finally the caught the gun which was after camouflaged and protected in a special railway bunker / shelter.Another interesting railway tank is this Russian version I show below:The model is from a friend of mine and not for public sale, so I’m more than happy that I got one.