Panzerfähre across the river Seine 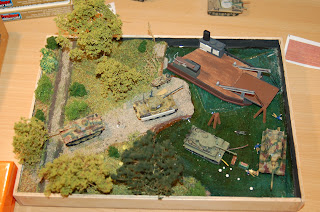 The Defeat of the German Panzerarmee 1944
After D-Day, the German Panzers knew only one way, the way back. The positive aspect was, it made the supply line shorter, the bad point was a lot of bridges and railway lines were destroyed either by the US-Air Force or by the French Résistance.
The idea to build a diorama with a German Panzergruppe on a ferry, came as I found an article about the German retreat from France. During the return the Germans had to pass over a lot of rivers. One major problem was the river Seine.
In one of my French magazines, there were some nice pictures of the different types of ships the Germans used. Actually you could say, everything able to swim, was used.
From local ferries up the several German MFP (Marine Fährprahm) everything was more than welcome.
As the maximum seize of any of my dioramas is related to the shoe boxes I use for later storage, the size would be 21 x 27 cm, or just DIN A4. (Very similar to the American Letter size)
So I wanted to show…
Kommentar posten
Mehr anzeigen
Weitere Posts